La Classica and La Romantica, the first two cruise ships built in Italy since the 1950s.

Built inspired by futuristic details while celebrating the old-fashioned charm of luxury and entertainment, Isolfin delivered the insulation of these mighty cruises.

The Costa Classica and Costa Romantica are two sister ships of Costa Cruises built between ‘91 and ’93 in the shipyards of Fincantieri (Marghera). They are the first two cruise ships built in Italy since the 1950s and they were designed with a unique mix of futuristic and retro inspiration.

Costa Romantica was christened in 1993. It is 45 meters tall, a length of over 200 meters, and hosts almost 700 cabins, some of these with private balconies. It features swimming pools and whirlpools, restaurants, bars, and a theatre along with precious details such as hand carved wood finishing and Carrara marbles.

Isolfin handled the isolation, including the entire refitting performed in the 2000s.

ISOLFIN was involved in the R&D project of thermal insulation methods in order to reduce energy consumption (and subsequent reduction of CO2) at the Saras Sarlux refinery in Sarroch, Sardinia. The research was developed in 2020 during the ten-year shutdown and maintenance of the IGCC plant at the Saras refinery.

The ISOLFIN study followed the directives of the company’s EIIF certification (European Industrial Insulation Foundation) with the input of ISOLFIN engineers.

Isolation is another face of green migration. The energy that we save is the greenest energy.

Maybe you didn’t know that…
ISOLFIN is the proud sponsor of the Swiss football team AS Castello (https://buff.ly/3l7Ry18). Go AS Castello!

From September 28-30, ISOLFIN will be exhibiting at the 2021 OMC — Med Energy Conference and Exhibition in Ravenna (Italy).

60 YEARS OF ISOLFIN. Works that have marked history.

Ravenna. A town of fisherman and farmers during the 1950s, but contained a new wealth still to be exploited: methane.

This wealth led to the construction of the «Giant of Ravenna», one of the largest chemical plants in Europe that Enrico Mattei, first President of ENI (National Hydrocarbons Authority) conceived, entrusting it to ANIC under the direction of capable engineers.

The petrochemical complex used methane gas discovered in the Po Valley and offshore Ravenna, gas which was used for the first time to manufacture chemicals. The activity was hectic given that the factory was constructed on marsh land, rendering every movement challenging, and more than 5,000 highly specialized workers were employed to start the production later that year. The deadline was met and within two years all was up and running – surprising both the Italian and foreign industrial communities.

Ravenna had changed. It was now the cradle of a mighty modern petrochemical plant, based on methane, discovered in the sea and in the hinterland. The Italian «miracle» of the 1950s led to the record for the first production of cold SBR synthetic rubber in Europe, along with fertilizers and other chemical products.

During this exciting time, Isolfin looked after the insulation works of the Ravenna plants and became a trusted reference point in the following years.

Last Saturday 4 September 2021, the delegation of the Indonesian Embassy in Bern, represented by Ambassador Muliaman Hadad and his wife, Mrs. Mia Rachel, Mr. Desrial Anwar from the Department of Economics and Mr. Francis Wanandi, Director of the Indonesian Chamber of Commerce for Switzerland, visited the headquarters of Isolfin Holding SA, in Via Curti 19 in Lugano, and Isolfin CEO Marco Nori, who is an engaged supporter of relations between Switzerland and Indonesia.

Topics discussed included the import and export activities that tie the two countries ever more strongly since the enforcement of the commercial agreement voted in March 2021.

Ambassador Muliaman Hadad and Marco Nori (in the center) 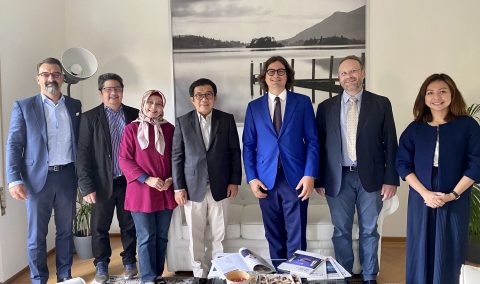 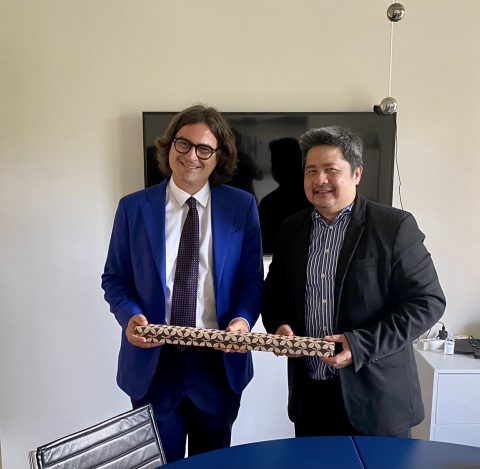 Rome, May 20, 2021 — ISOLFIN, a leading company in the services sector for the main petrochemicals, shipbuilding and energy groups, announces that its subsidiary ISOLFIN Russia LLC has recently signed two contracts for insulation services and mechanical activities of two energy plants in Russia.

The first contract provides the client Saipem, with painting and fireproof insulation activities in the Gazpromneft refinery in Moscow.
The second contract involves subcontracting activities for Saren B.V. at the Kaliningrad plants. The activities include the supervision, assembly and welding of structures of the Arctic LNG 2 Project which is developed in Siberia for the extraction of liquefied natural gas (LNG). Saren is a joint venture between Saipem S.p.A. and OOO Renaissance Heavy Industries for the Arctic LNG 2 project.

Founded in July 2020, ISOLFIN Russia aims to intercept the opportunities of the energy market in Russia with a responsive organization that is integrated into the country’s economic fabric. ISOLFIN Russia is a member of Confindustria Russia — the association of Italian industrialists in Russia — which represents the interests of Italian companies and develops relations between Italian and Russian institutions.

Our CEO Marco Nori has interviewed Alec Ross, former Senior Advisor for Innovation in the Obama admninistration and today Distinguished Visiting Professor at Bologna Business School.
Where the digital transformation is taking the world.